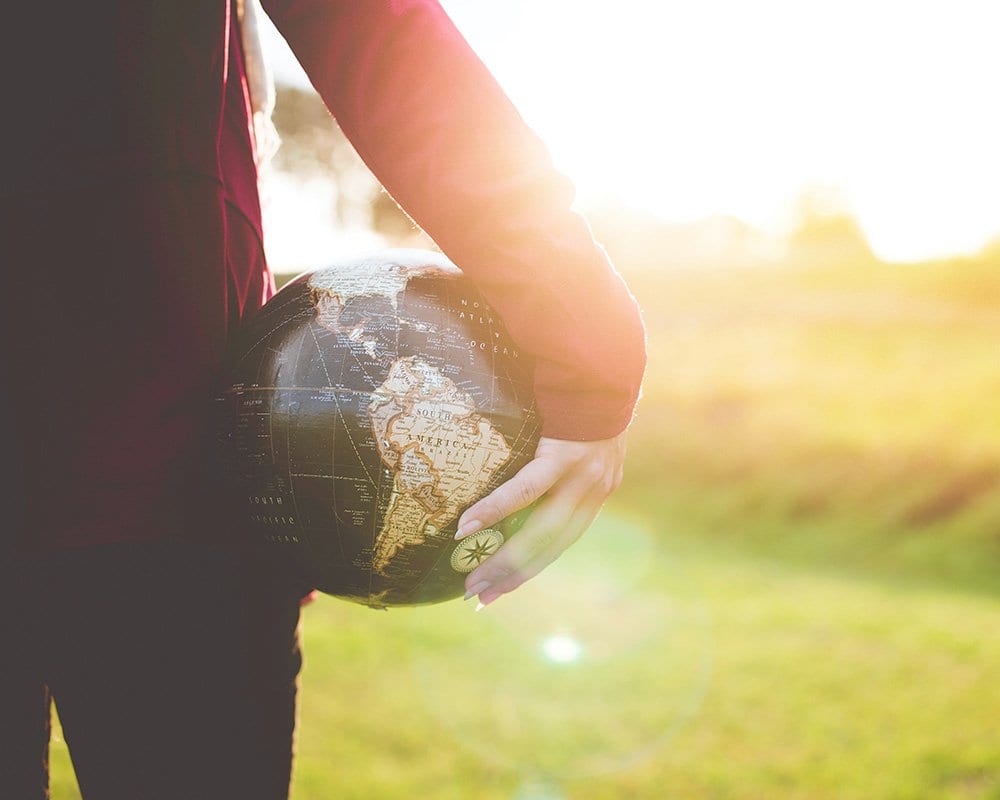 by Nels Angelin
Photos: Globe by Ben White on Unsplash; Ocean by Ray Hennessy on Unsplash

I love to tell The Glories of God in the Heavens are Telling. Our earth is the home God has made to be inhabited. Even with the curse of sin, there are glories of God that are seen in so many ways.
There is another glory that also belongs to God, the glory of His judgment. “God saw that the wickedness was great in the earth… And the Lord said, I will destroy man whom I have created from the face of the earth” (Genesis 6:5,7). In the flood, God destroyed all the earth. The whole planet was restructured. That judgment by the flood is still visible in all the earth, but men would deny that it was anymore than a myth.

The judgment of God is ready to visit earth again. Earth forever changed again. “The heavens and the earth, which are now, by the same word are kept in store, reserved unto fire against the day of judgment and perdition of ungodly men” (1 Peter 3:7). Sadly, most everyday, the news has the actions of the Marxist desecration of America by those called Americans. That should remind us we have the sure word of God, which is our obligation to give at this time just as faithful Noah did up to the day the judgment of God came and closed the door of the ark, and the face of the earth was forever changed by the action of God. The evidence of the study of geology is indelibly inscribed in rocks as the waters moved across the whole of the world showing just how powerful the action of God is in judgment, as it was in the creation of our planet.

The glory of God was magnificent in creating every provision of life. It is also as profound in the record of action of judgment of God. Amazing how the tide of public opinions has been shaped so graphically to tell the story of what happened on a grand scale by the hand of God, and it is made to appear that it was not God at all that shaped the record of our world from the flood.

This article is but a preview of what I have seen to present. There is so much to tell, I feel like I am virtually sitting at the feet of Noah to tell the people why they should get on the ark.

It seems the sands of time have ground all so slowly since the flood. Men have forgotten what took place during the violence of the movement of the earth. People have tended to look at the evidence formed in rock to see only what they want to see. It is comforting and, praise God, there are still men of God in science to point our attention back to God, who moved the world by the things that are seen and just how grand a scale it is. The worldview of Naturalism has shaped the history of science to forget God. I should take a moment to see where it has come from.

There is a view that has been presented by men of science. You have probably heard the earth we stand on was once all in one single continent called Pangaea. That may well be quite true, and Biblical too. “And God said, Let the waters under heaven be gathered together unto one place, and let the dry land appear, and it was so” (Genesis 1:9). During the one-year event of the flood, the earth was radically changed. It moved the positions of the continents of the world into the arrangement we see today, all in one year. This we call plate tectonics. Secular science dogmatically holds on to their cherished view of millions of years, or billions, it took to form the world-slowly. It makes much more sense to see that the radical change of the earth in the flood, which would include movements that took place rapidly in one year not millions. The flood was catastrophic, not slow and quiescent, the power of God is prolific that formed the earth and pushed up the high mountains high above the oceans and turned the axis of earth 23 1/2 degrees to give us the seasons of time.

There is the Godly view of plate tectonics presented as a pre-flood supercontinent by Antonio Snider Pellegrini in his book “La Creation Mysteres Devoiles” in 1859. Pangaea, a single continent, was illustrated to be split apart during the flood. He dubbed the action “continental sprint”. A fast action with earth movements was measured by rapid action moving in meters per second! The naturalism views have widely sought to slow that down, measured only in centimeters per year as seen by the action measured today. Somewhat like the growth of fingernails. True, technology can measure with satellites the plate movements to fine scale the continents floating on the mantle of earth like a cork.

Conventional thinking is presented as Uniformitarianism taught by James Hutton in 1785 in his view “Anti Catastrophism.” He said the causes seen in sedimentary rock are results of processes of decay and rejuvenation and are cyclic. His word was, “no vestige of a beginning, no prospect of an end.” Charles Lyell championed the position of an old earth, “the present is the key to the past.” Charles Darwin was so influenced by the writing of Lyell he took the first edition of his book “Principle of Geology” during his voyage of the SS Beagle.

Joyfully we teach our children the song about, “The rains came down and the floods came up…” God’s flood with Noah was not just a heavy rain and a local flash flood. I will come back to this glory next time to show more of what took place in the flood over all the world in a short time when “the world that then was, being overflowed with water, perished” (2 Peter 3:6).