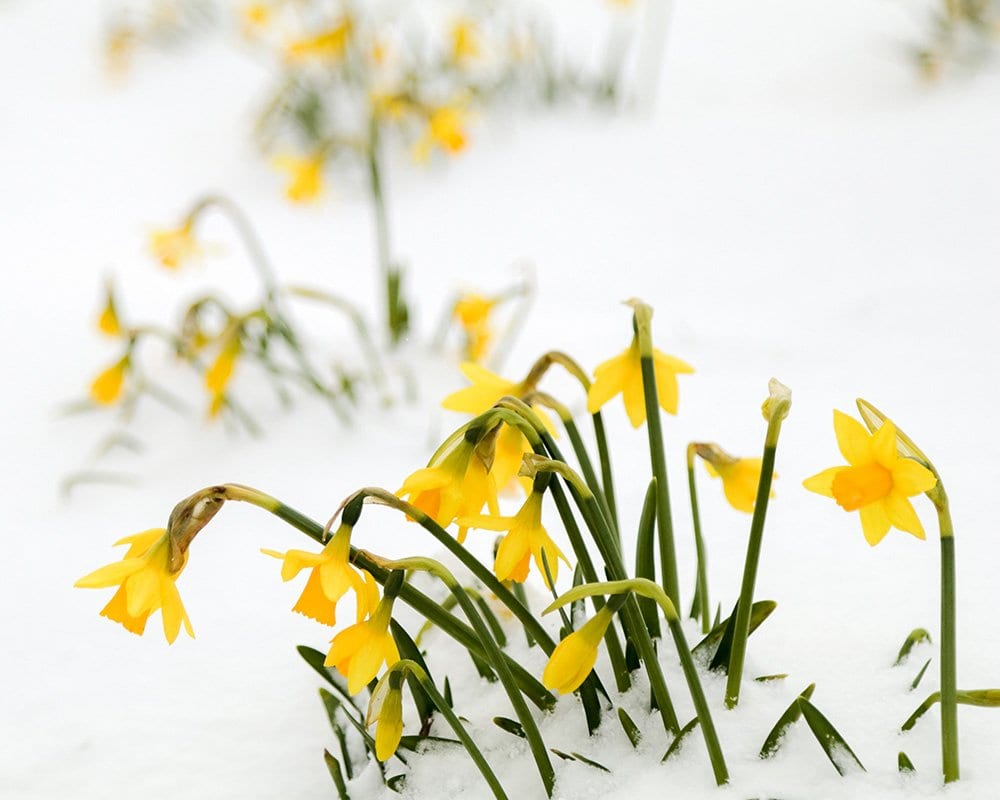 New life is coming back alive again. A resurrection from the sleep, sunshine again for all the new life that is pushing up from the ground. The daffodils came up first. The hills are waking to be filled with new colors, fresh and alive. The grip of cold is yielding to the sun’s warmth, sometimes with a cover of white snow. The promise that more is to come. The redbud, dogwood, fruit trees, and a riot of delicate little flowers coming to smile to their Creator’s hand.

Yes, this is the time of year that tells us again that our Savior’s word is true. There is a resurrection that is coming, and soon. Oh, my family, we must yet wait a while. Just as the bright color of the little daffodil rises when the rest of the world is yet gray and dull, the promise is still sure. The buds are filling, the ground is stirring. Life will come by the order of the One who has the sure word of promise that cannot fail and will not stop, and life is again full.

The blaze of the glory of God is coming. It will break free again.

Now, what prompted me to write this story? When I wondered what it should be, I had not a glimmer of what to write. There are several thoughts ready to open up, but they still lie mostly dormant. Then it came to mind what I had seen and read of what are the plans of man are for the future. It is 50 and more years away and spoken of as success. Should I call it the glories of man are telling? That would be blasphemy to what I know. Well, to compare the glory of man to the Glory of God has no peer. In the days of my youth, there was no Star Trek. I watched as Sputnik flew as a star across the sky. I watched the space age being born. Finally, we had a satellite. Explorer found space, then Mercury, and Gemini, and Apollo carried spacemen, astronauts. The race was on. We were not the first to reach the moon but, we were the first to have men walk on the moon. Many times over and over men blasted off to our Moon, and then it ended. Successes and failure and loss. The International Space station continues with astronauts of several nations, but it is now growing old.

Apart from all the world of men, all the stars of the heavenly universe have remained in place, long before there ever was a rocket. We have flown to the Moon and walked in the lunar dust. The Moon is in place by the design God assigned to it. There is none other like it anywhere in our solar system. But there is no life there. God did not make the Moon for life.

Beyond Apollo, the history of Space Science has carried the USA to visit all the planets in our Solar system by robotic probes. Even the amazing little planet Pluto, smaller than our own moon and three billion miles away. Pluto is a frozen world of Methane, Nitrogen, and water ice, yet it has been endowed with a complex faint atmosphere. Before we could make our visit to Pluto, men demoted the planet to a dwarf planet. Pluto was not made for life. Mars is nearby, only 65 million miles, so there is a lot of attention by men with rockets to go there and even set up home base with the intention to become an inhabitant. But that is not all. With all the imaginations of science fiction, the imagination dreams of men are shaping up intent to become true. That is not all. Men want to make Mars a creation factory. They think they can replicate life by their own design. Mars was not made for life.

The history of our world was early scarred by the imaginations of men after sin was born. “There were giants in the earth in those days . . . .and the same became mighty men which were of old, men of renown. And God saw that the wickedness of man was great in the earth and that the imagination of the thoughts of the heart was only evil continually,” (Genesis 6:4,5). Thus, God saw the innovations of men and all they intended to do. It took the power of God to create this world with all the complexities that make the provisions for life. When men fashioned their thoughts to rebel against God, their sin ripened till God brought the worldwide mass catastrophe to destroy men with the earth in a supernatural way that only God can do. All life perished in the flood.

Science today is becoming more and more influenced by imaginations. Cosmology is the formulation of conjecture or a plan for a hypothesis. The plan is getting serious when the planners take on the prerogatives that belong to God alone. In the works is a plan seeking what is said to have an ability to obtain immortality. The inventions that are being developed are working with 3D printing in which objects are able to be produced by machine from programming. Habitats can be produced by this modern method of native material. Also, futuristic is 3D printing of body parts and android productions. Something new I saw proposed was 4D printing. Hmm, wonder how that works.

It is quite certain God does not look well on any plan to share His attributes that belong to God alone. A world out of control and immersed in vain imagination reaped the actions of the flood. The Bible has revealed in the word the mass extinction of unrepentant men that will come again to earth for much the same reason and for false worship that is not of God.

Set all of that aside. We look for the promises of God that He will come again as He said, to receive the people of faith and . . . “the dead in Christ will rise first to meet the Lord in the air, and so shall we ever be with the Lord,” (1 Thessalonians 4:16,17). God is not planning to bring a kingdom to earth when He comes. He has a kingdom and a city not by the hand of man, but, “whose builder and maker is God,” (Hebrews 11:10). After a thousand years, the city (camp of the saints) will come to earth for the final demonstration. To be clear, that demonstration is wrapped up in the term from Revelation 14:10,11. The word is, “torment.” The word, many have wanted to make it say torture. The Greek word John uses, “basanimos” can include physical pain, but it is more in harmony with the message of Revelation 14 as the judgment of God. Thus, the meaning for torment is, “testing,” to “prove what it is.” Revelation 20 is the message of the final act to end sin forever.